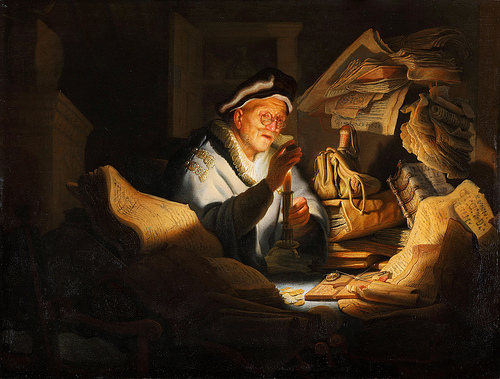 Rembrandt illustrates the parable of the rich fool, as told in Luke 12. At night a rich man studies one of his golden coins. In the early 17th century a stack of books was often used as a symbol of vanity. The Hebrew letters suggest a biblical setting. The usual interpretation of the parable is that there is no point in spending a life gathering wealth. After all, onced you die money is of no use. It might even get into the hands of people who do not deserve it. It is therefore thought to be wiser to be «rich toward God». The alternative title is «The Money Changer».

Rembrandt was born in 1606, in Leiden, Netherlands. He is generally considered one of the greatest painters and printmakers in European art history and the most important in Dutch history. He was one of the most recognized storytellers in the history of art, possessing an exceptional ability to render people in their various moods and dramatic guises. Rembrandt is also known as a painter of light and shade and as an artist who favoured an uncompromising realism that would lead some critics to claim that he preferred ugliness to beauty. Rembrandt’s greatest creative triumphs are exemplified especially in his portraits of his contemporaries, self-portraits and illustrations of scenes from the Bible

This site uses Akismet to reduce spam. Learn how your comment data is processed.