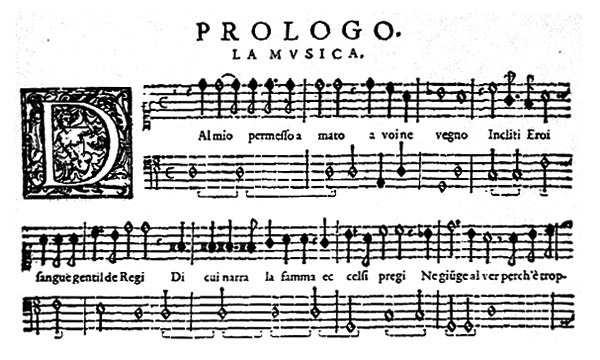 Claudio Monteverdi’s Orfeo is widely considered the first great opera. The libretto, penned by Monteverdi’s friend Alessandro Striggio, relates the legend of Orpheus and his descent into the underworld to recover his beloved, Euridice. Monteverdi’s opera was commissioned by a wealthy group of Mantuan nobility known as the Accademia degl’Invaghiti whose members included Striggio and the heir to the Mantuan throne, Francesco Gonzaga. Gonzaga’s palace would later serve as the location for the premiere of Orfeo on 24 February 1607; a second performance was prepared for the ladies of the city the following week.
Opera as a musical genre was the development of a group of Florentines who were looking for a way to present plays in music. The Florentine Camerata, as they were known, looked to early Greek drama, which was believed to be entirely sung, as a model. To recreate the ethos of Greek drama they used a new form of vocal writing, known as monody, to heighten the words of the drama. Over the accompaniment of basso continuo (chords improvised from a framework given by the composer and performed by a chordal instrument or instruments, such as lutes, harpsichords and the like and a bass instrument such as a cello) a soloist would sing in a type of heightened speech, known as recitative. Interspersed throughout the opera were also sung passages, often strophic or rhythmically lively, known as arias, and passages halfway between recitative and aria, known as arioso. The structure was filled out with choral numbers, dances, ritornelli (instrumental interludes) and so forth.
It is important to remember that modern notions of opera or film were nonexistent in the 1600s. Drama functioned more as ritual than as excitement. When Monteverdi approached the composition of Orfeo, he approached it as he would a ritual text, such as a Mass. However, given that most music of the time was of significantly shorter duration, Monteverdi realized that he would need to have a larger musical form to tie the varied elements of the opera together. To do so, Monteverdi arranged his opera in a chiastic structure – (a structure in which individual parts pivot around a central axis, as in, for instance ABCBA) pivoting around the third act and its climactic aria Possente Spirto («Powerful Spirit»), an aria in which Orfeo tries to convince Charon, the boatman who ferries souls across the rivers that divide the world of the living from the world of the dead, to allow him, a mortal, entry into the underworld.